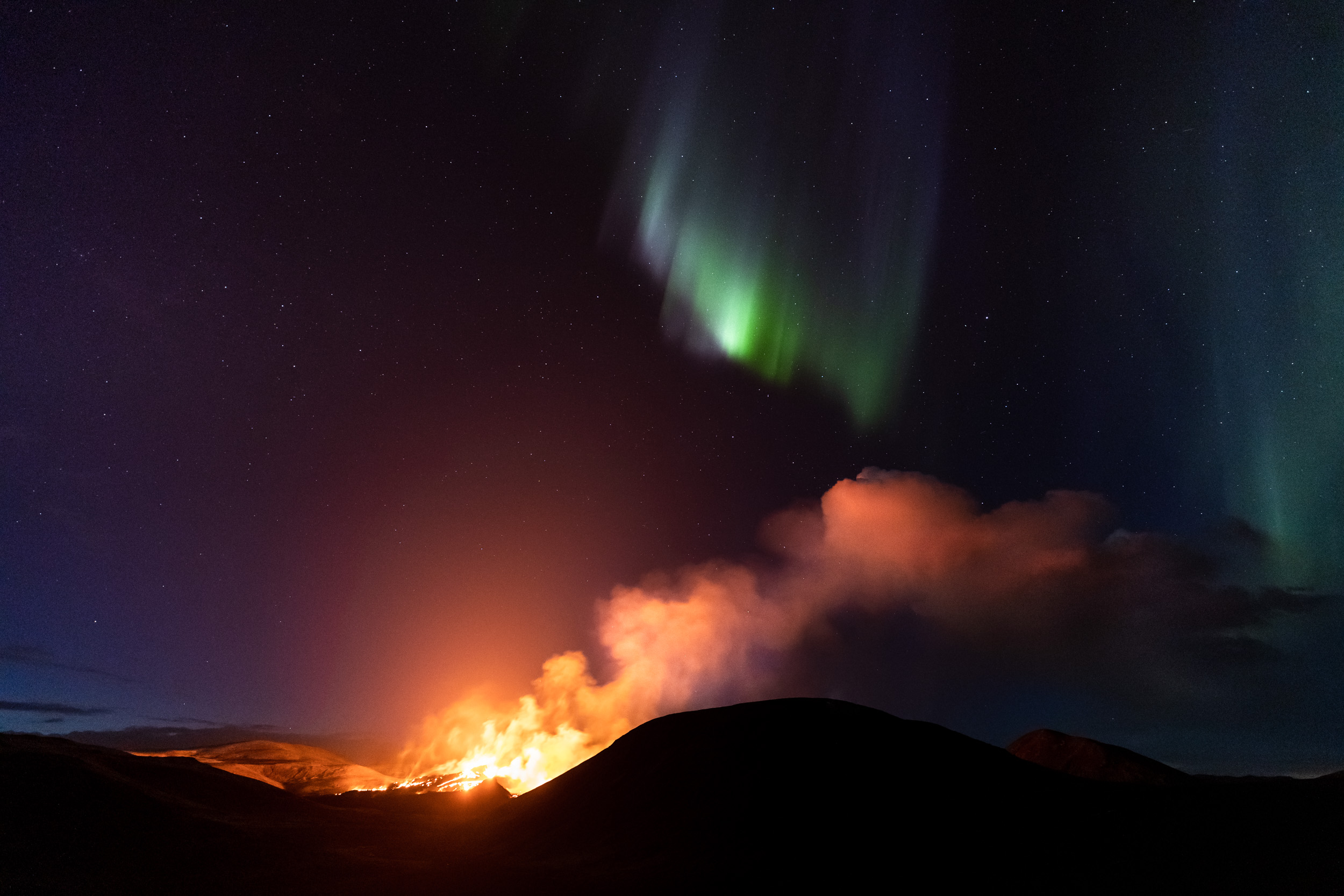 The Shot of a Lifetime – A Volcanic Aurora

This is my story about photographing the aurora borealis above the active eruption in Geldingadalir, Iceland. The eruption has been on-going for several weeks and during that time I have been thinking a lot about whether or not I would get the opportunity to photograph the northern lights above the eruption. I consider this scenario to be somewhat of the “holy grail” of photography in Iceland as it’s a situation that brings together two of the most iconic natural phenomenons in Iceland in a single image. While the solar activity had been stellar on several nights since the eruption started, the cloud coverage had never really been good enough to attempt to photograph this specific scenario. To make matters even more challenging, the window of opportunity was closing fast as the days are getting longer and the northern lights would soon not be visible anymore due to the lack of darkness. Add a full moon to that mixture and it’s sort of a photographic mission impossible.

On the evening of April 18th, I felt the conditions for both solar activity and cloud coverage looked good therefore I decided to set out for another evening at the eruption. This was already my 8th visit to the area. The good thing about going so many times is that I am able to go with a specific goal in mind, which was photographing the aurora this time. And, as my friend keeps reminding, you miss 100% of the shots you don’t take. What you don’t try, you can’t achieve.

When I arrived at the eruption, the weather conditions weren’t very pleasant. The temperatures were below zero, with a strong windchill due to the harsh wind and, in true Icelandic fashion, the weather went from hail to sun to snow and back to sun. Once the sun set, the whole area was covered again with clouds and, due to the cold, I had decided to cut my losses and head back down. Sitting down while waiting in the harsh and freezing wind made my body temperature drop and I felt that was not worth it.

However, on the way back the unimaginable happened. The clouds started vanishing and the sky completely opened. I started to notice that there was a very faint aurora swirling right above me, almost invisible to the naked eye. Out of experience with these conditions, I decided to see what would happen. When the aurora is overhead, even though it’s faint, it means the activity is strong and more might happen. These conditions tend to occur when the light of the full moon is cancelling out some of the auroral light as it’s a much stronger light source. I put down my tripod, mounted my camera and sat tight to see if anything more would happen. After all, there was a really good chance it might pick up again.

After about an hour waiting, I couldn’t believe my luck. The aurora picked up and started dancing above my head. It slowly moved closer towards the sky above the eruption. I took shot after shot, thinking the lights might disappear before they would move into the frame I had envisioned – just in case. And then it just happened. The aurora moved into the right spot and I was just awestruck. This is such a rare occurrence, to have an active eruption and the northern lights all in one experience! After this, I packed up my gear and, with a smile on my face, I hiked back down the mountain while the northern lights were still dancing above. It was simply magical.

Below you can see the photograph which I loved most after this amazing experience.

For those who are interested, I’m also selling prints of this photograph in my webshop or by clicking the image.

This article was also posted on my Behance profile and you can check out the image on my Instagram profile and Facebook page.