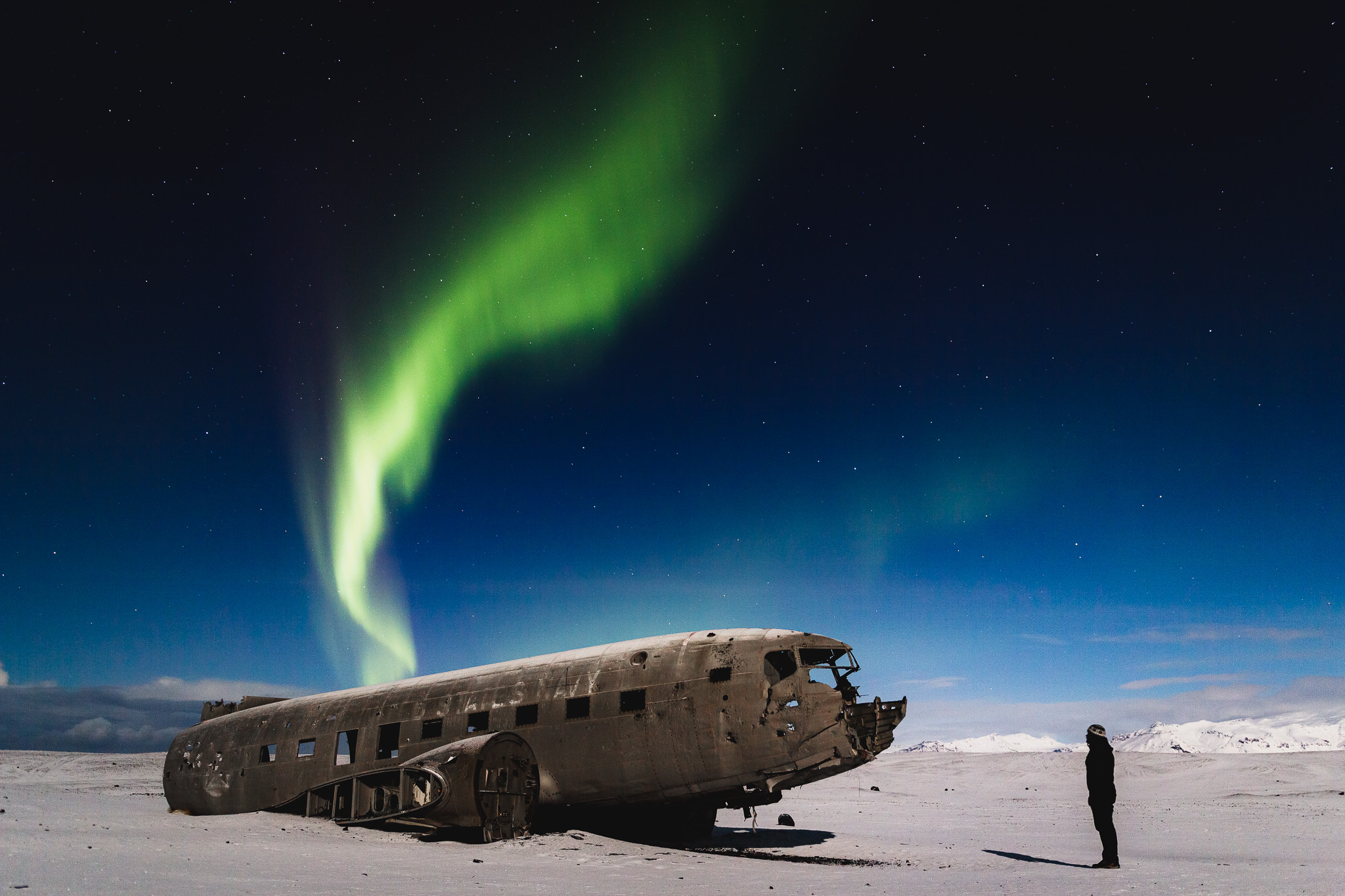 Behind the Shot – Aurora Above The Plane Wreck

What Is ‘Behind The Shot’?

I want to start off 2023 with a brand-new blog concept: Behind the Shot. To me, photographs are strengthened by having a good story to support them. At its core, photography is the art of capturing memories and those memories deserve to be told & shared. With this new concept I want to tell people that story. I want to share what effort, struggle and sometimes luck is behind the publishing of that single image you might see in your social media feed. Every month I will be sharing one photograph which has a good story, a deeper meaning or a struggle behind it.

Acting on an Impulse

This first photograph is a special one to me: the northern lights dancing above the (now famous) DC-3 plane wreck in Iceland. It’s the photograph that started it all and lead me down the path that turned me into the professional photographer I am today.

Ten years ago, in 2013, I began discovering what a special place Iceland had become to me in an oddly short time. When I returned from my second visit earlier that summer, I had immediately booked a winter trip for 2014. But before 2013 was even over, I impulsively jumped onto a plane to Iceland for a short weekend getaway in December. I would arrive on a Friday, drive around on the Saturday and fly back home on Sunday. My goal was not so straightforward but clear: seeing the northern lights.

At this stage in my life, I had never seen the northern lights before. I had done a bit of research and that week the solar activity was forecasted to be excellent. All I had to do was travel to Iceland and wait until it was dark – or so I thought at the time. As you can imagine, I have since learned a great deal about the aurora and looking back, I was maybe a little bit too naive and hopeful that I would be able to spot the lights in such a short timeframe.

After arriving to Reykjavík that Friday evening, I checked into the hotel and picked up my rental car. Even though the forecasted cloud cover wasn’t looking particularly great that evening, I headed out of town anyway. I wanted to use all the time I had to maximise my chances. After driving around for a few hours, I called it a night and returned to the hotel empty-handed. All I had seen that night was snow, more snow and even more snow but I was not gonna let that take my focus away from my goal.

For an inexperienced winter driver, which is what I was at the time, the road & weather conditions were challenging. On a few occasions I even encountered whiteout conditions, which I had never experienced before.

Is It a Cloud or the Aurora?

The next day I set out really early to get the most out of my day. Because I was only there for one full day, I spent my time driving the southwestern corner of Iceland, following a hole in the clouds. I started out driving along the Golden Circle and eventually ended up on the Ring Road, which I followed all the way to Vík. When it started getting dark, I had ended up near the Sólheimajökull glacier. As I started walking towards the glacier to try and take a few shots, I noticed a faint grey cloud above. I pulled my camera out of my bag, put it on my tripod and started taking a few long exposures to see if my dream was becoming reality. It seemed luck was on my side! That grey whisp of clouds turned out to be the northern lights which were slowly becoming greener to the naked eye.

After staring at the lights above in amazement and excitement, I noticed they started to become more intense. At the same time, I realised I was quite close to the plane wreck. “How cool would it be to photograph the aurora above?” was the only thing on my mind so I headed there. Back in 2013, you were still allowed to drive most of the way and because it was freezing cold, the sand had turned into a frozen concrete making driving really easy.  Today, you would have to hike at 45 minutes one-way which is something I would not recommend in temperatures of -15 degrees Celsius. In a matter of minutes I arrived at the wreckage. Meanwhile the aurora had moved from the northern horizon to a position where it was almost directly above me – moving intensely back and forth.

I rushed to put my tripod down, set up my camera on a timer and started photographing. After just a few tries, I captured this shot of the aurora above the wreck. I felt I needed to pose in the frame to give the whole composition some scale. I really liked how it seemed as if a spirit is leaving the wreck.

The fact I was able to take this photograph on such a basic camera, is a very good example that gear only matters to some extent.

The Beginning of a Journey

Looking back, I was incredibly lucky to be at the right time in the right place. I had almost sabotaged myself and set myself up for major disappointment by making this a very short trip to Iceland. It greatly limited my chances for success. However, it all ended up working out for me.

It’s interesting to think back of this trip and look at it in a greater picture. This particular moment turned out to be a defining moment for me as a person and my photography. I realised how much I enjoyed chasing the idea of a shot and ultimately figuring out how to capture the essence of a moment in a photo. It’s the first time I actually put “intention” into my work. It made me decide to pursue landscape photography more seriously which ended up being one of the best decisions in my life. This impulsive trip had unknowingly become the beginning of an incredible journey.